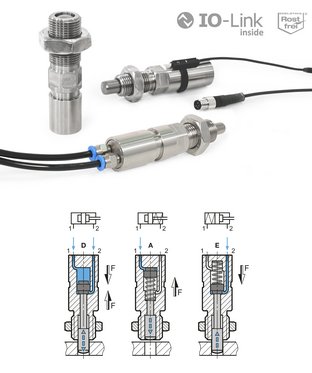 Ganter is expanding its range of indexing plungers with a technical treat. The newest addition, type GN 817.7, is pneumatically actuated and can be seamlessly integrated into automated processes thanks to state-of-the-art sensors.

The most recent indexing plunger development is pneumatically actuated. Plus, the part also detects both end positions with just a single sensor. This makes GN 817.7 a logical advancement over the manually operated indexing plunger GN 817.6. The new variant can also be used in hard-to-reach locations and can be integrated into automated processes. What’s more, GN 817.7 can be used as a replacement for GN 817.6 without any changes in dimensioning or signal processing.

The position detection of GN 817.7 is once again based on proven magnet technology but with some important new innovations. Not only are both end positions now detected but they can also be individually defined. The sensor teaching can be performed directly on-site with a small operating element on the sensor, which is held in place by a clip and supported by a cable. There are even LEDs for visual feedback. The other option for teaching is to use the convenient IO-Link feature via the system control unit. This standardized interface makes teaching a quick affair and also allows for immediate replacement in the case of faults, which significantly reduces downtime.

The high signals upon reaching the respective end positions are transmitted directly over the 4-pin M8 cable plug to the control unit of the system.

The GN 817.7 is made of robust stainless steel and is available in four plunger diameters and three functional variants. Type D is double-acting, meaning that the plunger is pneumatically retracted and extended. Types A and E are single-acting: the pneumatic actuation retracts the plunger in the case of type A and extends it in the case of type E. Note: The spring-loaded plunger always returns independently to its initial position if air pressure is lost.

The indexing plunger operates with pressures between 4 and 6 bar, while the IP 67-compliant sensor emits DC signals between 12 and 30 volts.