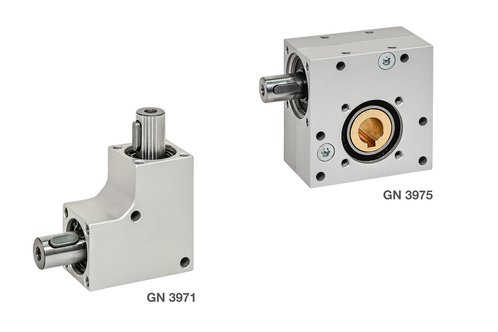 Bevel gear boxes GN 3971 and worm gear reducers GN 3975 can transmit high torque despite their very compact dimensions. They can readily be used for a multitude of applications, such as height adjustments resp. incline adjustments or to change the direction of shaft rotation.

The numerous fastening holes allow for simple mounting in any orientation or position. The parallel keys can take any angular positions.

Depending on the gear ratio between the worm screw and worm wheel, the worm gear reducer doesn't have a static self-braking, meaning that the worm wheel can be turned out of a resting state by a torque coming from the output end.

Further information such as mechanical features, assembly instructions and application examlpes can be found here...

You're searching for press relases on new products or additions and extensions to our product range?

Go to the Press Releases

An error has occurred!
We have received your callback request and will contact you soon.
Ganter-Service